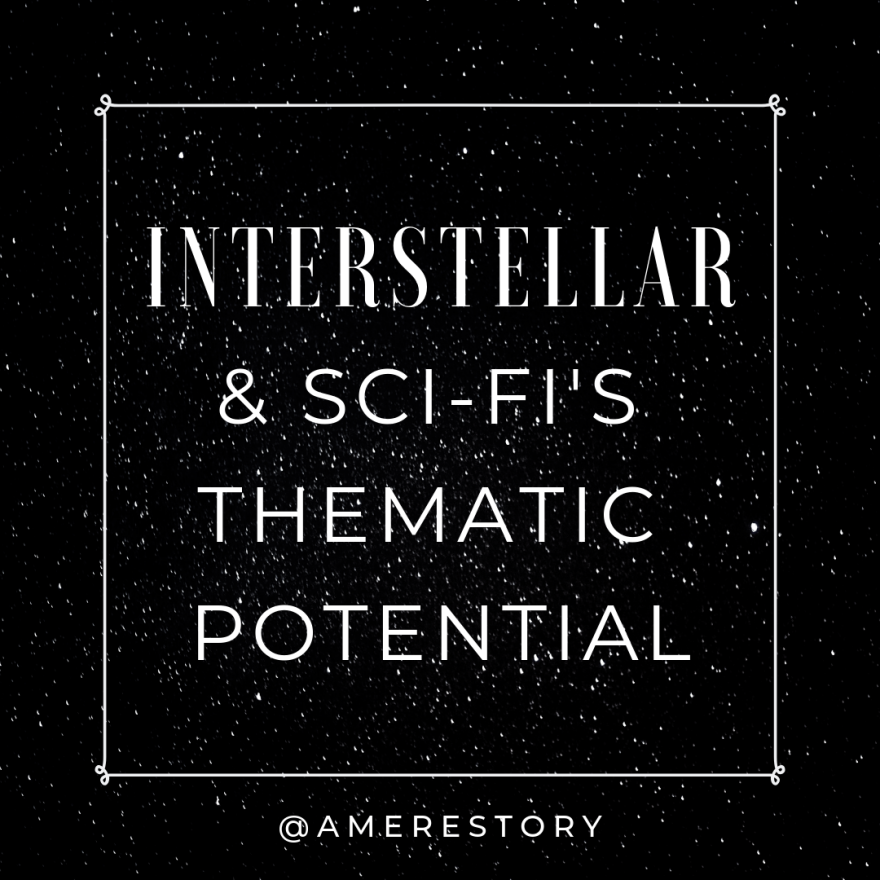 Last week I watched the movie Interstellar for the first time and was struck by an idea that’s crossed my mind many times before: science fiction has the potential to raise and contend with great themes. In fact, I think sci-fi is one of the best genres to question our purpose, strengths, limitations, and the nature of what makes us human. While I don’t actually agree with most of the thematic conclusions that Interstellar reached, the movie was still thematically successful in that it a) addressed large, pertinent questions about humanity, b) showed the complexity of searching for answers to those questions, and c) didn’t readily answer every question that was raised. Such thematic qualities seem so natural to me—technology of any kind, and thus science of any kind, is always begging the question “who are you really?” to humanity. Our creations both reflect and influence their creators; by writing a story that has a world steeped in technology of some kind, even when exaggerated far beyond our reality, those fictitious advancements turn into a mirror through which we can see, perhaps, who we truly are.

But I don’t think science fiction—at least the modern kind—has the reputation of being so poignant. Mention sci-fi and people will probably think of tropes: aliens, robots, genetic engineering, space travel, or futuristic tech like laser guns. Images of superhero movies, popular franchises like Star Wars and Star Trek, and over-the-top fight scenes with too many explosions might even come to mind. And though there are plenty of classics that are sci-fi in some degree—Frankenstein, Fahrenheit 451, 1984, Slaughterhouse-Five—I don’t think people view them or that genre as holding such a human quality as classics like Crime and Punishment, Pride and Prejudice, or Jane Eyre. This is also natural to some degree: a story set in an historical time period in our world feels far more “real” and “human” than one set in a speculative world with technology or creatures we’ve never experienced at all. It’s also not wrong for people to like any of the books, shows, or movies I mentioned above or to like them because they think space travel, aliens, or science experiments are cool. Every moment of entertainment doesn’t have to be ten-layers of philosophical depth. But I think that notion, along with the inundation of action-sci-fi movies (which I don’t unilaterally dislike, by the way), can distract from the core of what science fiction is and can be. We can begin to see only the tropes of the genre instead of what lies at its core.

I attended a writing workshop this past winter, and one of the speakers at the event (Daniel Schwabauer) gave a talk about genres and themes that touched on this exact subject. To paraphrase his session, each genre—not just sci-fi—asks “great questions;” the tropes that we associate with them come as a result of those questions and serve those questions, not the other way around. For example, sci-fi addresses human nature and if there is anything beyond us in the universe; historical fiction asks what we have in common with people from the past; mysteries examine crime, the nature of justice, and our perception of those around us; romance questions the nature of love and if we are capable of attaining it (all of these are examples from his talk, by the way). Both writers and readers need not only to be aware of the questions their favorite genres ask but ask whether those questions are the right ones—whether they get to the heart of the issue, whether they speak the truth or not. The tropes that emerge from each genre also need to be closely scrutinized to see if they’re serving those questions well or if they’re undermining the truth of a story.

The subject of Schwabauer’s talk wasn’t new to me, but I loved the way he presented it (which is why I wanted to directly mention it here). There’s nothing wrong, per say, about tropes we grow to love, and stories aren’t necessarily bad if they don’t wrestle with the “big questions of life.” Not all stories are meant to serve that purpose (and their purposes are great in their own right). But I think it’s very easy to let theme of any kind slip too far to the background, to become an ignored backdrop for character drama or a suspenseful plot. Bringing those questions to the forefront not only balances a story but illuminates and beautifies the drama or suspense at work. The questions, posed skillfully, can truly deepen a story.

I’m not, of course, including nonfiction masked as fiction in this category—nor do I think that certain subjects should be questioned in as much depth as they sometimes are (though that’s a topic for another time). When I mention theme, I’m referring to it in its best sense. I’m thinking of the stories that moved me and others to tears, made us feel the great expanse of time, caused us to stare humanity’s nature in the face, or made us curious about subjects we didn’t know much about. People, especially authors, often tout that stories are primarily meant to create emotion. That never sat right with me, but I think the gist behind that notion speaks to the power of a good story with a good theme (i.e. a story that raises, and at least part-way answers, the questions about life that wait just below the surface of our minds, too shy to be asked directly and too complex to be explored with anything but fiction).

Interstellar, for its flawed suppositions about humanity’s connection to the earth, took a story about space exploration and surviving a food source crisis and created something far bigger than the beautiful cinematography on a screne for three hours. The movie ultimately spoke to the nature and power of love (I will say no more—if you’re watched it, you know what I mean, and if you haven’t watched it, I’ve given you no spoilers). The fact that the movie meshed sci-fi and deep themes so well not only left me with a sense of awe, but it makes me giddy and hopeful that I can also accomplish that same effect with my stories. That is science fiction’s true potential.